I wanna hold your hands.

Went out for a walk at The Village today, tried to have a nice afternoon tea break in peace, nope, AJ says NOOOO.  Carry me, feed me, do everything just don't put me down in my stroller!  Hahaha! 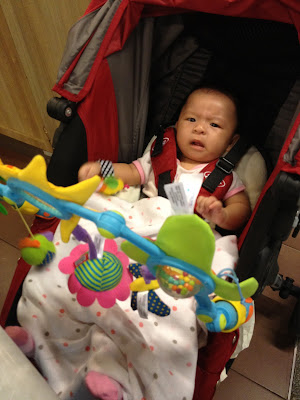 Please just look at how well prepared I was - full force toys in the stroller and on her wrist!

I was having some nice half boiled egg, kaya and butter toast and a cup of ice milo, I had her in my lap because obviously she was unhappy with something, took a mouth of my eggs and guess what!  She took a swipe at my bowl!  My eggs nearly overturned but I was so pleased!

Ok, dangerous if it had really flipped over or if it was something really hot but I was so happy, she's growing so fast!  This also means it's the beginning of my nightmare.  The past four months was tiring?  I'm almost certain it is nothing compared to the next few months to come.

Also, she can hold an item (if it's not too heavy and fitting in her tiny hands) for at least a minute or so now.  :)

So far so good!  She's still not rolling over 1 way yet - trying very hard, sometimes she's turns sideways and starts screaming - um, probably unhappy that she CAN'T do it.  Or maybe she's just hungry, I don't know.  We'll take it as it comes.  A lot more wary of her being too close to the side of the bed, just in case.  We don't want her first roll-over to turn out in an accident!

Had a heart to heart moment with my baby girl earlier on, usually after her evening feed, I'd burp and put her down on the bed to interact for the last time of the day but today, I just held her in my arms and swayed to the love songs playing on the radio.

After 2 songs, I lay her down on the bed and she just stared at me, for a long long while, like she knew, like she was talking to me, with her eyes.  Maybe she was trying to tell me "I love you".

Maybe she was just stoning and wondering why the hell are you not putting me to bed MUMMY?!

Heehee, whatever it was.. it has been a pretty good day!
Labels: daily life growing up milestones 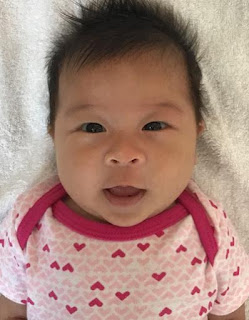 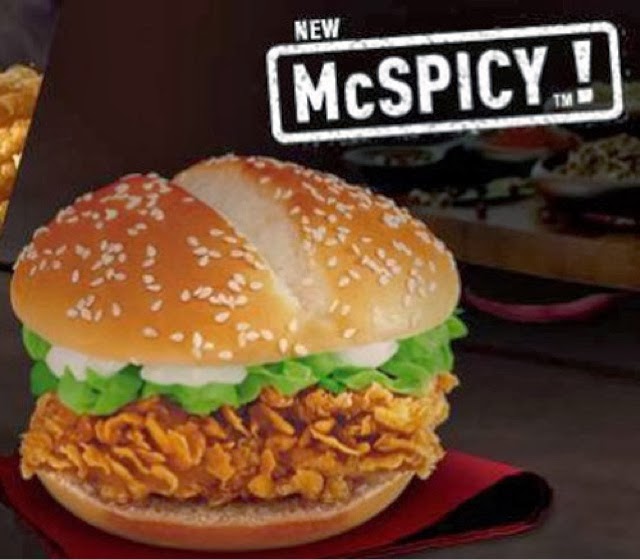